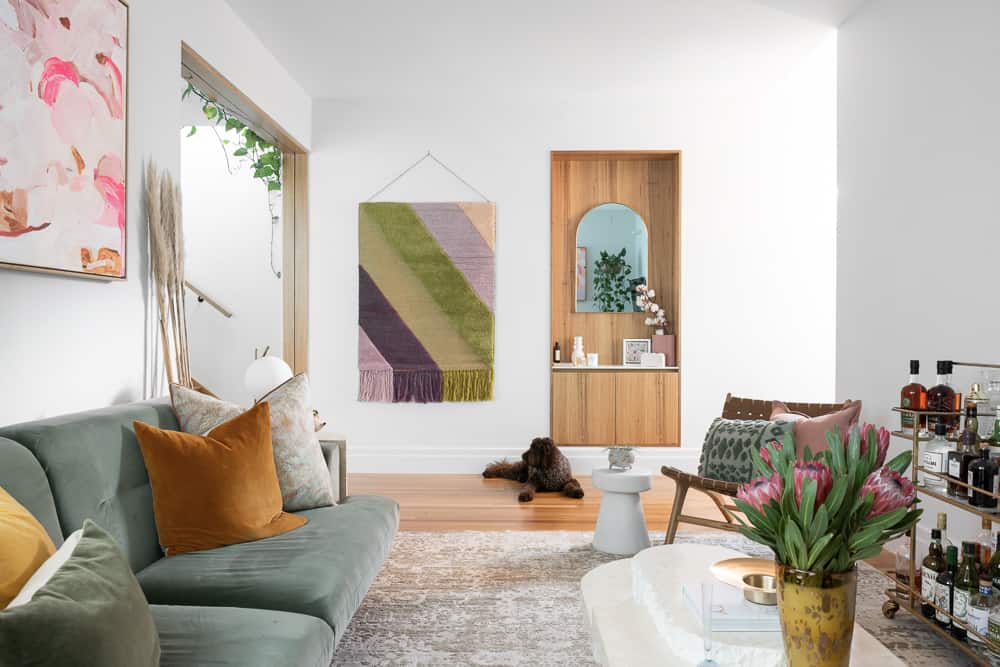 Devaki, one of BuildHer’s DevelopHers, started her renovation journey in 2015 which saw a fierce passion for design and interiors grow. What started out as a small scale renovation to make the home fresher, more functional and liveable with a tiny scope of which included moving a couple of walls and updating the kitchen, quickly turned into a full scale renovation.

Devaki and her husband loved the street and the original façade of the home, so they were set on maintaining the front section of the home. They designed a new section of the house which opened out to an extension, and gave the smaller original home an open plan kitchen/dining and additional bedrooms.

Their small update had turned into them gutting the entire home and essentially starting from scratch. The final product did retain the two original rooms and added an extension to incorporate the kitchen and dining, a master bedroom, ensuite, powder room, a hidden laundry and two kids bedrooms and a bathroom upstairs. A lot of house on a tiny block!

You can see how amazingly the build has turned out now, but it was not without drama (no build ever is we have learnt!):

However, the mistake that caused the most angst was an oversight during the design phase of the location of a sewer, which was not on their title, but on the other side of the ROW. The meant that although the original plans where approved they no longer met the minimum distance requirement. This caused chaos as the entire plan for the rear of the house needed to be redesigned and resubmitted to council.

For Devaki this was a low point.“It was a frustrating and disappointing moment for me as I had fallen in love with the original plan; a master, WIR and ensuite. The redrawing of the plans meant that we had to lose the WIR and instead have a wall of cabinetry and the position of the bedroom and ensuite had to be moved.”

She initially hated both of the options that were given to her and a ripple on of design changes needed to be made to ensure that it didn’t impact other parts of the home, like the amazing kitchen which was in the heart of the home. In hindsight though, the unplanned modifications were loved and turned out to be a blessing as they provided for a more functional end result, it just wasn’t the vision that Devaki had in her head.

‘I particularly love the morning light that streams in through the window every morning! and the second courtyard attached to the master definitely came in handy when toilet training my fur babies :)’

Why are you wanting to build your own home?

Devaki had always dreamt of builing her own home. She had been to countless auctions and open homes, and whilst she had fallen in love with some aspects of some of the homes, there were always changes to be made or things they would have done differently which meant they could not find the perfect home for them.

On the first day she saw Cecil St, she immediately saw the potential.

‘For me it was about creating a space that meets our needs and expresses our personalities. And having now lived in the house for a little over 2 years post-reno, I still get go ‘wow, we really did this’. I absolutely love everything about this home, from the morning light streaming into the master and kitchen/dining, to being able to see the sky from the shower, to the surprising little powder room.’

Devaki loved everything about coordinating, designing and building this home, but in particular the design process and the ability to select her own fixtures, fittings and finishes was her favourite part. With a clear vision from the very beginning, Devaki wanted to create a functional family home with a wow factor that she felt most of the homes in her area lacked.

‘A lot of heart and attention to detail has gone in to creating this home and I hope the next family that moves in loves living here as much as we have.’

Devaki joined BuildHer at the beginning of her build and became a DevelopHer shortly after, going on to study interior design. She has always had a love for it and about 10 years prior had started a course without completing it.

There are many moments that Devaki has been able to design into this home that she absolutely loves, like how the master is tucked away at the back behind a secret door.

‘I live for the oohs and aahs from people who come into the house and get something completely unexpected.’

Devaki learnt that she loves the process of engaging and working with an architect though out the design phase and found that the creativity of working on these plans reignited that passion for interiors. She is currently looking to pursue a career in interior design and developing properties.

When asked about compromises Devaki remarked ‘I am no good with compromises!’ But she was able to picot her plans which allowed her to upgrade so many of her fixtures/finishes. The two big items, that she was set on were the tapware and kitchen benchtops and splashback.

‘I had fallen in love with sussex tapware after visiting them during DenFair in 2018 and just ‘had to have them’. Similarly with the kitchen surfaces, i had a vague plan to use reconstituted stone but once I’d seen the large scale MAXIMUM porcelain panels i knew they were what this kitchen needed.’

Where they compromised to ensure that they could afford those other ‘extras’ were on things like the special aggregate in the concrete mix having originally selected a specialty mix that was nearly 10K over the cost of the base product.

She found what helped her most was having a clear understanding of what the ‘must haves/non negotiables” were vs. the ‘nice to have” elements.  And being a details person, she found that having a very detailed plan and budget meant that she was able to balance and compromise from a place of knowledge and power.

There were certainly some ups and downs through this build, things don’t always go according to plan and there will always be little set backs along the way but Devaki found it was more about how you deal with them that mattered. ‘Compromises are a necessary part of life when it comes to renovations.’

When we asked her about her journey with BuildHer Collective she said:

‘I actually found BuildHer towards the beginning of our build; we had already engaged a builder and were about to demo. I had very little knowledge about the building process before embarking on this epic renovation/extension – I wish I had found you sooner! Anyone thinking about renovating or building their home would benefit from joining the Buildher Community. The courses cover a lot of basics that most outside the building industry would not know. The Facebook community is fantastic – I love how supportive and encouraging everyone is. I have certainly caught the bug! I am always thinking about what’s next; I am actively looking at the moment so stay tuned!’

If you would like to learn more about Developing for Profit, book in a call with Courtney today via this link, we look forward to hearing from you.

Welcome to Jan's home! This is Jan’s home tour – she’s all the way in Canberra so we can’t see her, but we can celebrate her and her beautiful home....

We are so exited to introduce you to the lovely Jacqui! A student in our DevelopHers Masterclass, we met Jacqui last year at our Weekend Intensive...

Heating and Cooling, what's to know? When you think about building a new home or renovating/extending one do you instantly think about your heating...

To Pool or Not to Pool?

Joni – It’s a family affair and all cards are on the table!

All property images taken by SpacecraftLandscape design by Bespoke Landscapes Thinking of packing your family up and moving interstate? Joni and...

Why yes, I do want to make a profit from my reno!

Developing is a fun and amazing way of life. FACT. Well, that is what we at BuildHer Collective believe! Being able to make a home that someone will...